U Laforenza
(Head of Laboratory)

Aquaporins (AQPs) are small transmembrane proteins (26–34 kDa) that were initially thought to function only as bidirectional water-selective channels, they have successively been found to play a role in important cellular functions, such as cell proliferation, cell differentiation, cell migration and cell adhesion.

Thirteen water channel proteins have been identified in mammals and they have been divided into three groups based on their structural and functional characteristics: (i) aquaporins (AQP1, 2, 4, 5, 6 and 8) selectively permeable to water; (ii) aquaglyceroporins (AQP3, 7, 9 and 10) permeable to glycerol, urea and other small solutes in addition to water; (iii) S-aquaporins (AQP11 and 12), with peculiar intracellular localization and functions. There are lines of evidence that modulation of AQP function or expression could have therapeutic potential in refractory glaucoma,  obesity, oedema, brain injury, and especially in cancer. 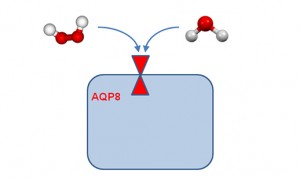