Neuroimmune interactions in the auditory brainstem

Our group focuses on microglia (the resident macrophage of the brain) and associated monocyte-derived populations, in healthy and diseased brain tissue, along with other neuro-immune and vascular interactions.

Tinnitus is an auditory disease characterized by the perception of phantom sounds. Several studies have identified the dorsal cochlear nucleus as a necessary station for tinnitus onset after peripheral trauma, similarly to spinal cord dorsal horn in chronic pain. We have found that modulation of microglial states may affect tinnitus severity in rodents, and we are currently characterizing microglial subpopulations and interactions with other cellular elements within the cochlear nuclei.

Microglial activation has been found to be a complex and graded process, characterized by a wide range of appearances. Using morphometrical analysis tools, we are looking for feature sets that best parallel state changes in the cochlear nuclei. Moreover, we have observed a continuity between the microglial population within the brain parenchyma and the macrophage populations located in the adjacent ventricular choroid plexus and in the cochlea and auditory nerve. Especially in pathological conditions, in fact, macrophages appear to inflow in the cochlear nuclei from the choroid plexus. We are starting to explore the behaviour of macrophages in the auditory nerve with a novel iDISCO-based approach which allows us to maintain the integrity of the very fragile connections of both cochlea and choroid plexus to the brainstem. 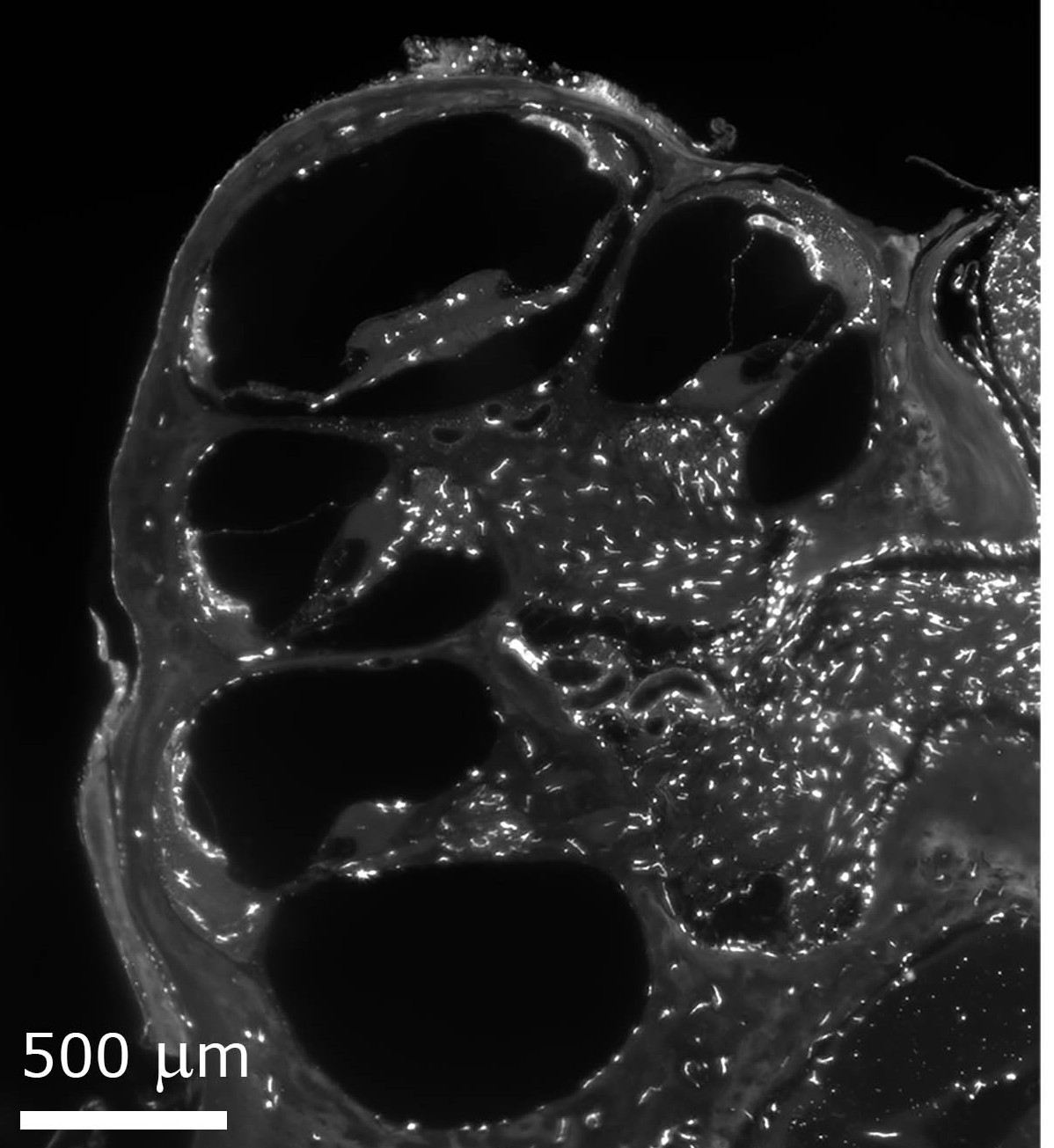 Optical section of the cochlea. Macrophages are clearly seen with Iba-1 immunostaining.

Due to the complexities of macrophage/microglial populations, no single marker seems to capture the whole spectrum of their activation states, nor their spatial heterogeneities. For this reason, we will combine morphological observations with transcriptomic analysis of acutely isolated microglia, both in healthy animals and after damage, and then focus on the expressed genes related to activation type.

-Glymphatic/vascular system and the 4th ventricle

Fluid regulation in the brain is a quite recent field, mainly due to difficulties in preserving and visualizing the structures involved, which are at the same time very fragile, heterogeneous, and closely connected to both meninges and brain tissue. For this reason, no consensus has been reached yet on the circulation of immune cells from hematopoietic sources (possibly located within the skull itself) to brain vessels to Virchow-Robin spaces to brain parenchyma. Whole-body clarification protocols, which have been developed in rodents, will be employed to preserve all compartments from diploic bone marrow to meningeal vessels to choroid plexuses to brain parenchyma, allowing to study the correlations between each stage.

Once the optical sectioning system is up and running, given the availability of GM mice expressing GFP-labeled CX3CR1 (which labels microglia and brain infiltrating macrophages) – and if necessary with the help of additional GM lines, it will be possible to reconstruct the whole 3D population of tumour-associated macrophages, and compare it to microglia/macrophage distribution in the surrounding brain parenchyma/vasculature.