Since many years the main research of the laboratory has focused on biological activity of natural or synthetic derived compounds with a potential role in the prevention of human pathological processes, such as cancer. Our work have clarified the mechanism of action, through the identification of protein targets, of the antiproliferative and/or antioxidant effect of some natural agents, such as beta-carotene, anthocyanins, flavonoids, and more recently, stilbenes. In particular, in experiments with different synthetic derivatives of resveratrol, which is the most studies among the stilbenic compounds, we have demonstrated that the 4′-hydroxystyryl moiety of the molecule is the specific structural determinant required for the inhibition of cell proliferation, but not for antioxidant activity, which is dependent on the three-hydroxyl groups in the molecule. A potential mechanism underlying this antiproliferative activity seems to be related to its ability to block DNA synthesis, through inhibition of DNA polymerase δ. We are currently evaluating new synthetic analogues, and in particular 4,4′-dihydroxystilbene, containing two 4-hydroxystyryl moieties, which is more effective in inhibiting tumour proliferation, metastasis formation and thus with potential pharmacological interest. In addition, synergistic effects of some anthocyanins and flavonoids are in progress with particular regard to their activity against dermatological inflammatory and cancer diseases.

A further project aims at evaluating the biological activity of new compounds that have a fluoroquinolone-based structure for their use as photodynamic therapy, with the main goal to investigate their mechanisms of action. Fluoroquinolones are widely used broad-spectrum antibiotics that play an important role in the treatment of human and animal infections. A number of photochemical and photophysical studies, dealing with the mechanisms of photosensitization induced by these drugs, have shown that fluoroquinolone photoreactivity may be modulated by the nature and position of the substituents attached to the quinolone ring. The large majority of them contain a fluorine atom in position 6 of the condensed ring; in some cases, further fluorine atoms are present at 5 or 8 positions. It is generally assumed that their adverse photoreactions in vivo caused by exogenous molecules are due to activation of oxygen to produce reactive oxygen species. However, this is not an absolute rule and it has been suggested that in some cases, a reaction by aggressive intermediates formed in the photodegradation of the drug is involved. As an example C8 fluorinated molecules can give the corresponding triplet aryl cation. This has been shown to react with DNA nucleotides, in particular with purine bases. This reaction is oxygen-independent due to the short lifetime of the cation involved. This would be important for devising drugs useful for an oxygen-independent phototherapy against cancer cells, notably living in an hypoxic environment.

In another line of research we study the proteins involved in cell cycle regulation and DNA replication and repair. The DNA must be replicated and transmitted properly to avoid genomic instability, pathogenetic basis of several human diseases, such as cancer. To this end, cells have developed a complex system to monitor and signal DNA damage (checkpoints), and to activate DNA repair systems.For many years the research of the laboratory has been directed to some proteins that regulate the cell cycle, and that appear also to be involved in the DNA repair process. Among these proteins, the cyclin-dependent kinase inhibitors p21CDKN1A (p21) plays a very important role in the cell cycle control, both in the checkpoint of G1 phase, and in the inhibition of DNA synthesis by associating with PCNA, a cofactor necessary for the activity of many enzymes involved in the DNA metabolism. We have demonstrated that p21, in cooperation with p27, an important member of CDK-inhibitor family, is also involved in the control of the entry into cell cycle (quiescence). In addition, p21 appears to promote the efficiency of DNA repair processes, like the Nucleotide Excision Repair (NER), in which the protein seems to be required to regulate epigenetic modification, such as acetylation, of some NER factors. Epigenetic modification of PCNA has also been investigated during DNA synthesis, considering the crucial involvement of both transcription factors p300 and CBP. A the moment, our attention is focused on the protein that binds to damaged DNA (DDB2), which, combined with DDB1 in the complex DDB, exerts a key role in the recognition of DNA damage induced by UV in the Global Genome Repair (GGR-NER). Modifying a conserved region of DDB2, we have found an interaction site for PCNA. We are investigating the function of this interaction that seems to be necessary for the correct NER process execution and cell cycle. 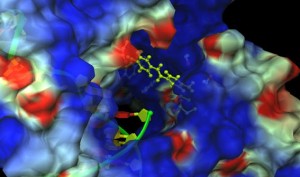