The formation of the body plan of complex multicellular organisms depends upon an extensive network of intercellular signals that control the migration, survival, division and fate of each cell in the body. The migration of neural crest cells from the dorsal neural tube, of myogenic precursor from the epithelial dermomyotome and of cancer cells to distant organs (see Fig above) are striking examples of processes in which long distance cell migration determines crucial physiological or pathological processes.

Our laboratory is interested in understanding the molecules that control the growth, migration and differentiation of normal and cancer cells. We focus in particular on HGF/SF–MET, a signalling a system essential for embryogenesis and for cancer spreading and have studied in previous years the cell response to HGF/SF and its physiological roles through gene targeting experiments. The current work of the laboratory focuses on three lines of investigation:

(i) the crystal structure of HGF/SF and MET as the basis for understanding the structural basis of receptor activation. An example of such studies is shown in the Fig below depicting the complex formed by the bacterial protein InlB in complex with a MET741, a soluble fragment of the MET ectodomain (Niemann H et al, Cell 130:235-46, 2007 and Ferraris D et al,  J mol Biol 395:522-32, 2010)

(iii) the development of antibodies and small molecule MET antagonists for application in metastatic cancer. 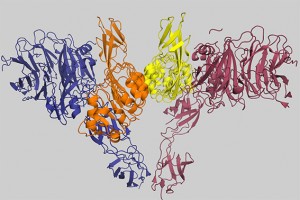