Structural characterization of new lectins and identification of their function

The proteins that selectively recognize and bind carbohydrates without modifying them enzymatically are called lectins. Ligand binding precedes the fulfilment of important biological functions such as cellular signaling, scavenging of glycoproteins, cellñcell interactions, differentiation and protein targeting, as well as in host defence mechanisms. Although initially characterized in plants, lectins are ubiquitous in nature and have been identified in most living species, from viruses to man.

Our research focuses on the identification, structure determination and detailed description of the active site as well as the specificity of ligand binding of novel lectins. In collaboration with Dr Hugo Monaco’s group in Verona, we have identified and characterized  the Fish Egg Lectin and the figure above shows its beta propeller fold, studied by X-ray diffraction of carp FEL crystals.

Recently the work of the laboratory has been concentrated on fungal lectins due to their antitumor, antiproliferative and immunomodulatory activities. Given that only 10% of mushroom species are known and have been taxonomically classified, and that the crystal structures of only 17 mushroom lectins have been determined,  they represent an enormous unexplored source of potentially useful and novel lectins such as the BEL ﬂ-trefoil, isolated from Boletus edulis, shown in the figure below. 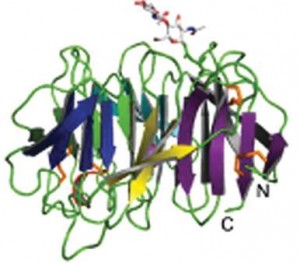