Human serum albumin, the major blood protein,  is encoded by a single autosomal gene, which lies at position 4q13.3,  near the centromere of chromosome 4.  Mutations in this gene  may result in the presence of two circulating forms of the protein (bisalbuminaemia or alloalbuminaemia) or in the virtual absence of the protein from the blood (congenital analbuminaemia, CAA).

Alloalbumins are markers of migration and  population genetics, and can provide an useful tool for the study of the unique binding properties of the protein.  CAA is an extremely rare autosomal recessive disorder, characterised  by  a relatively mild phenotype, because of the compensatory increase of other serum proteins. In contrast to the benign presentation of CAA after birth, the pre- and peri-natal course appears less favourable,  supporting  the hypothesis that the rarity of the trait may be attributed to the fact that only a few analbuminaemic individuals survive past the neonatal state.

As part of a  nearly thirty-years research project, we are continuing to study  the molecular defects causing alloalbuminaemia and CAA in humans. Our research is aimed at improving the knowledge of the structure-function relationship for  albumin  and is addressed to  shed light on the molecular basis underlying the analbuminaemic trait. The distribution of the mutations associated with CAA within the gene  is shown in the top figure, whereas the localisation of the single amino acid substitutions found in alloalbumins in the three-dimensional structure of the protein   is reported in the bottom figure (red spheres). Major information on this research can be found at the web-site www.albumin.org, which is presently managed by LM, MC, and by Dr. Ulrich Kragh-Hansen of the Aarhus University  (Denmark). 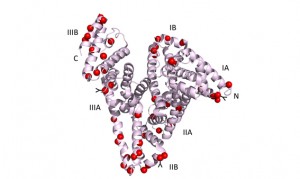